Steve Mitchell from the Buffalo Farm has received the green light to start producing Scotland’s first Buffalo Mozzarella cheese from his farm in the Kingdom of Fife.
The move realises a dream Steve has had since he established the business in 2005 with his small herd of Water Buffalo selling buffalo meat and burgers at farmers markets.
His dream was further fuelled with the visit of Gordon Ramsay several years back, where together, they made a trial batch of Buffalo mozzarella. At that point, Gordon said he wanted to invest if he was to produce Buffalo Mozzarella.
After enduring a roller-coaster period that saw highs with national TV coverage, Steve thought his dream was over when a major investor pulled out at the last minute – leaving him with no option but to sell a large part of his herd.
Not one to give up without a fight, Steve decided to launch his ambitious crowdfunding campaign just under two years ago, where he successfully raised £800,000 from customers from across the UK and has seen the Buffalo Farm become Scotland’s first and only producer of Buffalo Mozzarella.
Steve has been able to build his custom-designed dairy parlour and Mozzarella Production facility just outside Kirkcaldy in Fife, where production is now underway.
Steve has assembled what he describes as a world-class team to produce a world-class Scottish Buffalo Mozzarella, strengthening his farming team, bringing in expert cheesemaking skills and bolstering his commercial operations.
Steve explained, “We are now embarking on the most exciting and the most terrifying part of the project. We now have to live up to the targets and expectations we have set ourselves and discover whether the market enjoys our Scottish Buffalo Mozzarella as much as we do.”
I have been lucky enough to tour some of the most respected Buffalo Farms in Italy, tasting their wonderful produce, and we wanted to create a product which put Scotland on the map and could be considered as being world-class.”
He continued, “Provenance is so important in food and never more so than in Buffalo Mozzarella.  Our cheese is produced in a matter of hours, from milking to finished balls of Mozzarella. As a result, you can really smell and taste the freshness compared to one from an overseas producer that has had to travel for days – I am absolutely thrilled at the quality we have achieved.”
The Buffalo Farm has already ready received notes of interest from a number of retailers, restaurants and wholesalers who are keen to take the exciting new product. Steve is working with his team to support the continued growth of the product without compromising the quality.
Steve commented, “I would much rather produce small batches of world-class cheese than compromise what we have. We have been given the opportunity to create something quite special and the team is determined to make Scotland a force to be reckoned with in the world Buffalo Mozzarella market.”
Lucy Husband, Market Development and Business Engagement Director at Scotland Food & Drink, said: “The ambition and drive of Steve and the team at The Buffalo Farm to produce Scotland's first buffalo mozzarella has been nothing short of inspiring.
"As members of Scotland Food & Drink since 2015, it's been amazing to watch them grow and see that sustainability has been at the heart of creating this product.
"This is another excellent example of how diverse Scotland's larder truly is, which is only made possible by having producers like The Buffalo Farm."
- ENDS -
Steve and the Buffalo Farm Mozzarella Team 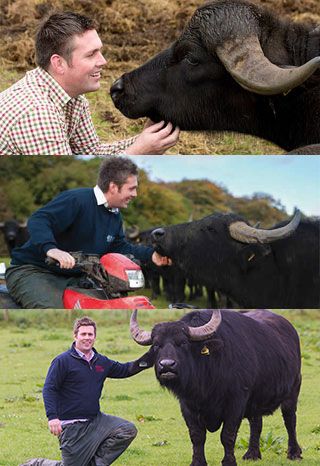 To be in with the chance of winning, simply enter your email address below and
opt-in to our mailing list - good luck folks

Competition closes on Friday 30th April and the winner will be
drawn at random soon after. T&Cs apply